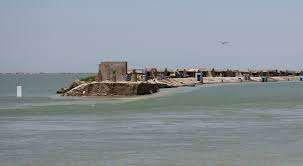 DADU: After Wednesday’s flooding of numerous villages in the union councils of War, Arazi, Dal, Bubak, and Jaffarabad in Sehwan taluka, floodwater from breaches in Manchhar Lake is now exerting further pressure along the Indus Link canal close to Bhan Syedabad town.

Bhan Syedabad, which has a population of 150,000 people and 10,000 flood victims, is in immediate danger from the floodwaters, prompting Jamshoro deputy commissioner Fareeduddin Mustafa to sound the alarm and ask for help. that the town’s citizens leave for safe havens.

The Sim Nullah (saline water drain) and Indus Link canal embankments, he said, would buckle under the increasing pressure. Water was streaming into Talati town from the overflowing Nullah near Talati and Kharagpur.

Desperate attempts to save the town

To defend the town, a huge number of the town citizens assisted government representatives in raising the Indus Link canal’s dykes with the aid of heavy machinery.

The adjoining Qalandari CNG filling station and Toll Plaza have been flooded, and similar efforts have been made to safeguard Sehwan from the lake’s flooding. In order to elevate the embankment of Aral Wah, machinery has been brought to sensitive areas.

Highway police have completely stopped off the N-55 expressway between Bhan Syedabad and Sehwan owing to floods.

The district authorities began evacuating residents from the Karampur area as 100 more villages in the nearby Sehwan areas of Kotohar, Arazi, and Bakhtiarpur started to flood.

Iqbal Hussain, the assistant commissioner for Karampur, asserted that if floodwaters reached Bhan Syedabad via fractures in the Indus Link canal, they would proceed to Dadu.

Residents in Bhan Syedabad are being asked to leave

DC Jamshoro Residents of Bhan Syedabad are being urged to leave the area and seek safety elsewhere by Fareeduddin Mustafa.

Sim Nullah’s and the Indus Link canal’s poor embankments both posed a severe threat to the town. Water is rushing toward Talti from the overflowing Sim Nullah near Talti and Kharagpur. Dadu district residents are being urged to relocate to