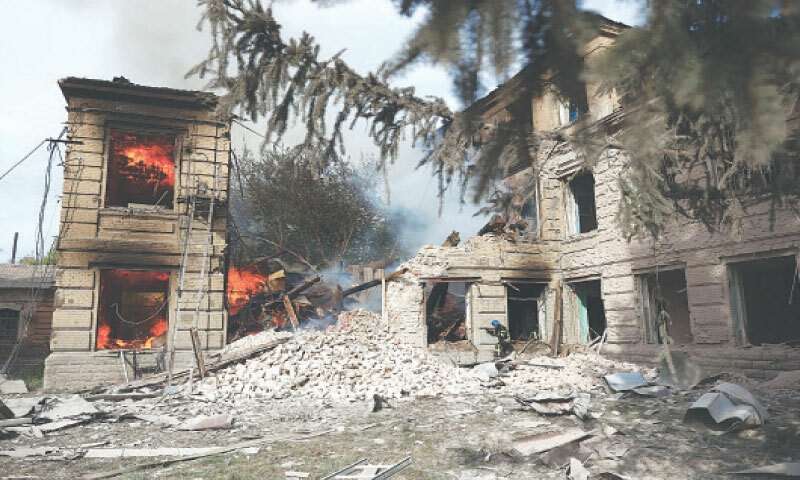 KYIV: The president of Ukraine warned on Thursday that the world narrowly avoided a radiation disaster when electricity to Europe’s largest nuclear power plant was cut off for hours. He urged international organisations to move more quickly to compel Russian soldiers to leave the area.

Russian shelling, according to President Volodymyr Zelensky, started fires in the ash pits of a nearby coal power plant, cutting off the Zaporozhzhia plant from the electricity system.A representative of Russia claims Ukraine is at fault.

Zelensky praised the Ukrainian experts who run the plant under the watchful eye of the Russian military, stating that backup diesel generators provided the power supply necessary for the cooling and safety systems at the plant.In a video speech, he stated that “if our station crew had not responded after the blackout, then we would have already been obliged to overcome the consequences of a radiation mishap.”

“Russia has positioned Ukraine and all of Europe in a scenario where a radioactive calamity is just around the corner… “There is a danger of a global radiation catastrophe every minute that Russian forces are stationed at the nuclear power plant,” he stated.

About 550 kilometres to the northwest of the plant, in the capital city of Kyiv, locals expressed anxiety over the development.Everyone is terrified, of course; everyone is afraid. I just want the situation to settle down again,” said 35-year-old businessman Volodymyr, who wished to remain anonymous.

Turkiye downplays worries about the warning of US penalties