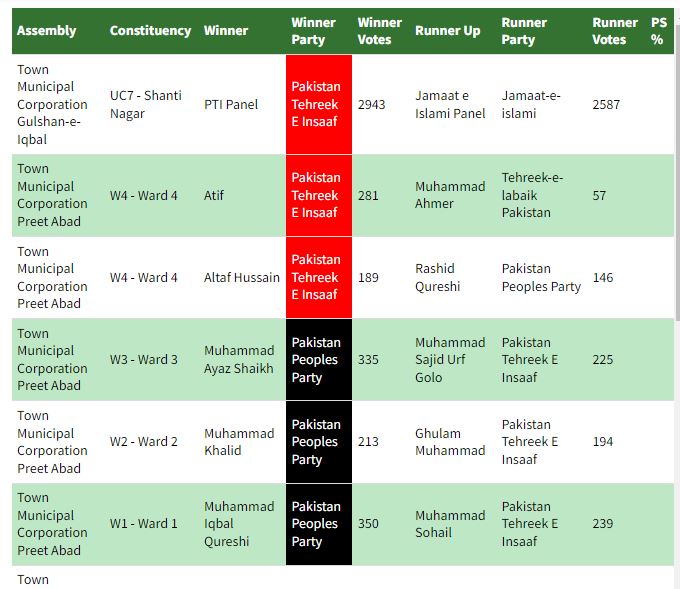 Karachi: The Election Commission has released the party position based on the results so far in Karachi.

According to the Election Commission, in the results of 136 Union Committees of the city, PPP is leading with 60 seats of Chairman and Vice Chairman, while Jamaat-e-Islami is second with 42 seats and Tehreek-e-Insaf is third with 26 seats.

According to the Election Commission, Muslim League-N won 4 seats while JUI, Tehreek-e-Labaik, Muhajir Qaumi Moment and independent candidate won one seat each.

According to the Election Commission, the results of the chairman and vice chairman of 99 seats in the city are yet to come.

According to the Election Commission, elections were held in 235 union committees out of 246 in the city, while the elections were postponed due to the death of candidates on 11 seats.

The result of the Chairman of South District of Karachi has been completed, in which the People’s Party has won 15 out of 26 Union Committees and Tehreek-e-Insaf on 9.

11 of Lyari’s 13 seats went to PP, PTI won one
The results of 12 out of 13 seats in Lyari Town have been announced, out of which 11 seats have been won by the People’s Party and PTI has succeeded in one seat.

The results of one seat of Yaqtabad town have come out which was won by Jamaat-e-Islami while 2 out of 3 seats of Town Municipal Corporation Maripur were won by PPP and one by PTI.

The results of 2 seats of Kemari Town Municipal Corporation are out, PPP and JUI(F) have won one seat each while PPP has won one seat from Ibrahim Hydari TMC.

PTI suffered a blow in Karachi, the district president himself lost the UC election
Also read this
The results of all USCs in Karachi will be completed by this evening: Election Commissioner Sindh
We are successful in 100 seats, results are being changed forcefully in USC: Hafiz Naeem
In Hyderabad, PPP is on the first position with more than 900 seats
The big upset of the Karachi elections, PTI president did not even win the UC seat
The biggest upset of Karachi election so far has come out, Pakistan Tehreek-e-Insaf President of Karachi and Member of Provincial Assembly from Karachi Khurram Sher Zaman UC has lost the election.

Khurram Sher Zaman has been an MPA from this area for ten years and was also being declared as the mayoral candidate by PTI, despite being a member of the provincial assembly, he was contesting for the seat of UC chairman.

On the other hand, the results are still being declared hours after the end of polling and the speed of results is slow, the results of Central, Korangi and Eastern districts are delayed.

PP wins in Hyderabad too
In the second phase of local elections of Sindh, the so far inconclusive and unofficial results of many districts of Sindh, including Hyderabad division, have come.

According to the unofficial and unofficial results, out of 3101 seats of Hyderabad division, PPP is leading by winning 1034 seats overall.

Results in Karachi are unusually delayed
Even after the counting of votes after the municipal election in 7 districts of Karachi, there is an unusual delay in getting the results.

Election Commissioner Sindh has written an emergency letter to all District Returning Officers.

The Election Commissioner of Sindh says that political parties have complained about not giving Form 1, 11 to the polling agents.

While giving a press conference in Karachi, Hafiz Naeem said that there is a mistake in the 30 voter lists, still a reasonable number of people have voted and many people of PP have also voted for Jamaat-e-Islami but the majority of us There are plans to reduce it.

Hafiz Naeem claimed that Jamaat-e-Islami has won about 100 seats, there is confusion and controversy on the rest of the seats, we have received form 11 with great difficulty, late at night forms 11 and 12 have started to be received. Results are not available, results have not been received from Arauz even after 18 hours of polling ended.

Talking to the media in Karachi, the Sindh Chief Minister said that the people of Sindh are kind enough to support us, we are expected to get more than 100 out of 235 seats in Karachi.

He said that these elections were very peaceful, there were some law and order problems yesterday but we solved them, there were 13 incidents in the whole election.

Maybe Jamaat-e-Islami and PTI will form a joint government in Karachi: Saeed Ghani
Photo: File
Photo: File
Leader of Pakistan People’s Party and Provincial Minister Saeed Ghani says that we have emerged as the largest party in local elections of Karachi, we will make contacts to bring our mayor in the city.

The provincial minister further said that PPP will win the provincial and national assembly seats from Karachi, we wanted MQM to participate in the local elections, MQM has boycotted the elections in the past as well, MQM’s right. They want to protest, make statements, those who have won will complete the term and serve the people. can

People's Party's superiority over other parties in local elections