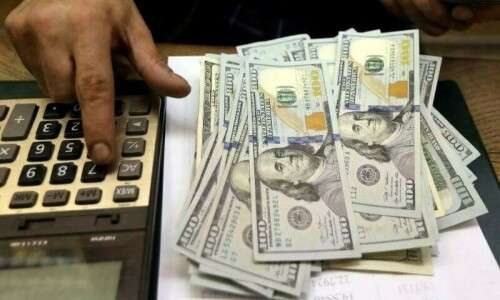 According to data provided by the Forex Association of Pakistan, the rupee lost Rs1.78 in early trade on Thursday on the interbank market (FAP).
In comparison to yesterday’s closing rate of Rs223.42, the dollar was trading at roughly 11:26 am at Rs225.20.

The dollar appreciated by 2 rupees against the rupee in the prior session as well.

The dollar has been rising against 40 other currencies for weeks, according to FAP Chairman Malik Bostan, and its effects are being felt in Pakistan’s currency market as well.

Boston said that the open market price of the rupee was Rs8 higher and urged the government to take action to reduce this discrepancy.

“The government should employ its diplomatic channels to abolish the UAE government’s requirement that travelers from Pakistan carry 5,000 dirhams in cash,” the official stated.

He continued by saying that if the $4 billion offered by friendly nations arrived in Pakistan right once, it would lessen pressure on the currency and aid in stabilizing its value.

Lamichhane, the cricket captain for Nepal, denies the rape charge